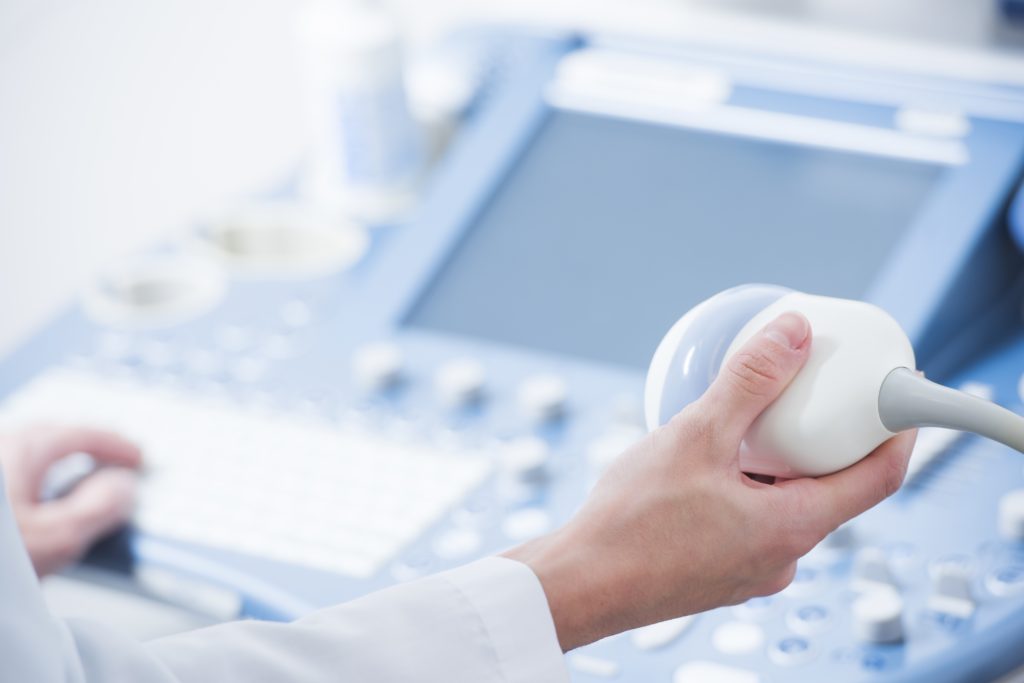 Ultrasound devices came first to existence with the discovery of the piezoelectric effect by Pierre and Jacques Curie in the 1880s. Since then, ultrasonic devices have been used in a wide range of industrial and medical sectors.

Ultrasound technology refers to the use of sound waves that are above the frequencies heard by the human ear. The human ear can detect a 20 to 20,000 Hz range while a typical ultrasound device can range from 2 to 22 MHz. In medical applications, these ultrasound waves interact with human tissues, which reflect, deflect, or absorb the acoustic waves in different proportions. Ultrasound devices make use of these interactions for imaging, therapy, anesthetics, and surgery.

The ultrasound probe, also called a transducer, contains several piezoelectric elements that are excited by an electric current. The electric current causes the piezoelectric to expand and contract to create a pressure wave. When an acoustic wave travels through a medium, its amplitude is reduced. Sound waves are measured in cycles per second, and waves are calculated to go through human tissue at body temperature at approximately 1540 m/s (about one mile per second). The speed at which an acoustic wave travels through the human body is determined by the density and stiffness of the different tissues. The greater the stiffness, the faster the wave will travel. This means that sound waves travel faster in solids than in liquids or gases. The attenuation effect is different for all tissues and is the reason why echoes from deeper structures are weaker than echoes from superficial areas. This allows differentiation between bones and soft tissue.

There are multiple modes of ultrasound for visualization. An amplitude mode, or A mode, will show different amplitudes as the sound is reflected. B mode, or brightness mode, is the most common ultrasound imaging; each of the pixels has a brightness and displays a grayscale image. M mode quantifies motion overtime over a single plane, and every motion over that plane over time will be potted. This is useful, for example, in reading echocardiograms when looking at valve motion. Doppler mode makes use of the Doppler effect, which denotes that a moving object will change the frequency of sound; as objects are moving, the rate of reflected sound is altered and, by interpretation of these changes in frequency, the ultrasound machine can convey motion. Doppler mode is used to evaluate the velocity and direction of the blood flow. Color Doppler assigns a color to blood flow based on the direction of the flow and Power Doppler assigns a color to blood flow based on the strength or amplitude of the returning signal.

Medical research has opened several new means of applying ultrasound to other medical applications. Ultrasonic systems operating in the kHz-frequency regime (20 – 90 kHz), used in biological research to break up cells and tissues, are used routinely in general and advanced surgical procedures for tissue cutting and hemostasis as well as for tissue removal [2]. Novel methods for ultrasound therapy include direct sonothrombolysis using external, typically low-frequency ultrasound has been tested for the treatment of thrombotic diseases, such as stroke. For example, recent work suggests that microbubbles enhance thrombolysis and may be of value in improving stroke therapy [3]. Finally, ultrasound-guided peripheral nerve blockade is perhaps the most popular ultrasound application used by anesthesiologists. It allows anesthesiologists to perform regional anesthesia more accurately, and it expands the ability to block smaller nerves and those in more difficult anatomic locations [4].