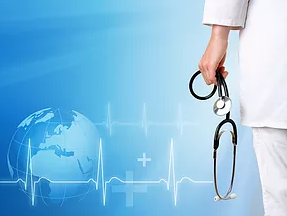 In diagnosing heart attack, doctors in the emergency room will order a series of troponin tests. One is administered immediately and the rest in a few hour intervals over several days. Constantly elevated blood troponins are indicative of cardiac injury. In a normally functioning heart, troponins are sequestered in cardiac muscle; any damage to the heart triggers their release into the blood stream. Given their specificity to the heart, they are routinely used as a diagnostic biomarker of heart attack.

Biomarkers are measurable biochemical characteristics from which aspects of an organism’s health status can be inferred. Thanks to highly advanced molecular techniques, a multitude of biomarkers associated with critical diseases have been identified. In breast cancer for instance, tumors overexpressing a growth factor receptor known as HER2, are associated with a poor prognosis. Interestingly, HER2 is also a drug target. Inhibitors against HER2 such as Herceptin have resulted in improved outcomes for HER2+ breast cancer patients. HER2’s significant role in breast cancer justifies the NIH’s considerable investment into cancer biomarker research.

Biomarkers are an important advancement towards personalized medicine where ultimately, drug dosing will be optimized to a patient’s metabolism and genetic profile. The central role that they could play in personalized medicine is plausible if you consider that at least 32 different biomarkers are investigated in cancer clinics to help determine drug regimens. However, to fully realize biomarkers’ potential, companion technologies allowing their precise measurement in clinically relevant timescales are necessary.

Indeed, tracking biomarkers in real-time offers considerable benefits in the clinic. In postoperative care, a device to continuously track inflammation marker levels would improve the likelihood of detecting an adverse immune reaction early enough to mitigate it. Additionally, it would prevent excessive blood draws and save on manpower required to run tests with current bench top techniques. Similarly, such a device will be a welcome addition in the ER for any number of conditions requiring serial blood tests. Outside of the clinic, people will be empowered to adopt healthy lifestyles if they can easily monitor their own physiology.

Minimally, the ideal real-time biosensor would consist of a very specific target detection method and a high temporal resolution. Most biosensors currently available in the market exploit their analyte’s chemical properties for detection and measurement. For example, continuous glucose monitors (CGMs), used by diabetes patients, rely on the oxidation of glucose catalyzed by glucose oxidase. The electrons produced in this reaction generate an electric current whose magnitude corresponds to glucose concentration. There are not very many analytes whose chemical properties can be utilized in this manner, and this limits the versatility of such biosensors.

The Plaxco group at UCSB is refining a novel aptamer based platform capable of detecting a significantly wider range of molecules. Aptamers are software designed nucleic acid scaffolds that bind to their targets reversibly and with high affinity (13). They are engineered to undergo a conformational change upon binding to their targets. The Plaxco group’s device incorporates a signal transducer which translates the conformational change into a measurable electric signal. They have successfully measured in real-time pharmacokinetics of doxorubicin and other drugs in the blood of rats in-vivo.

The optimal placement of a biosensor is determined by its analyte’s accessibility. Sensors measuring pH or electrolyte levels need not be implanted in the body. Most of them come in the form of smart wearable tech. A Kenzen Patch for instance can infer electrolyte levels from a drop of sweat. More complex technology is applied for biomolecules found in tissues or blood.

The biosensor by Plaxco’s lab was encased in a porous biocompatible membrane and implanted in the jugular veins of mice. The pore size was small enough to allow the sensor to interact with the analyte while protecting it from damage by larger components such as blood cells. The sensor functioned optimally for half a day. A variety of CGMs are implanted subcutaneously to measure glucose in the interstitial fluid following calibration with a measure of blood glucose via conventional means. In addition to utilizing a biocompatible encasing, they usually incorporate a drug delivery system that mediates the body’s immune reaction against the sensor. These last in the body for about a week after which their structural and functional integrity is compromised.

The technologies described above paint a somewhat positive picture for the future of real-time biomarker tracking. The Plaxco lab’s success in measuring pharmacokinetics points to potential in mitigating inter-patient variations in drug efficacy by tailoring doses to each patient’s measured drug metabolism. Electrochemical, aptamer based sensors are another promising avenue for target detection and tracking. It is worth trying the concept on protein biomarkers as these have critical impact in areas such as acute care and targeted cancer therapy.