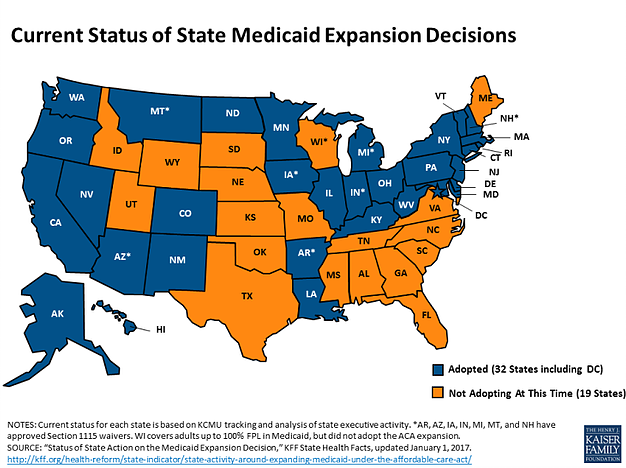 On June 16th, a bipartisan group of governors authored a letter to the Senate calling for a more open approach to legislating healthcare reform while heavily criticizing the House version of the American Health Care Act (AHCA), or the so-called Obamacare “Repeal-and-Replace” bill. In their letter, the governors argued that the AHCA “fails to provide the necessary resources to ensure that no one is left out, while shifting significant costs to the states”. This complaint stems chiefly from AHCA’s Medicaid payment reforms, the first of its kind since the entitlement program’s inception in 1965.

The AHCA and Medicaid

Aside from the changes the AHCA makes to the individual marketplaces (i.e. repealing the individual mandate, the premium tax credit, the cost-sharing reductions payments, and the essential services coverage in favour of state-opted community waivers), it also fundamentally changes the way the federal government pays for Medicaid.[i] Namely, the bill repeals the increased federal matching funds that 31 states used to implement the Affordable Care Act (ACA) Medicaid expansion and modifies the federal contribution to Medicaid, or the Federal Assistance Percentage, to either a per capita cap payment or a block grant. In both cases, states receive a set amount of funding for the federal portion of its Medicaid spending, with that set amount determined either on a per-enrollee basis (in the case of the per capita cap), or solely by a federal budgetary formula (in the case of the block grant). The funds would then be adjusted annually based on the Medical Consumer Price Index. If states spend beyond the federal contribution, they are liable for all additional costs, hence the ire of state governments.

Proponents of the AHCA cite the bill’s fiscal responsibility, including a cumulative $834 billion dollar reduction in Medicaid spending over the next ten years. Critics point out that the policy inevitably leads to loss of coverage for Medicaid beneficiaries and that per capita caps and block grants do not reduce health care expenditure overall, and instead forces states to absorb the excess costs.

An analysis by Health Management Associates indicates that the excess costs to states will be substantial; on average, states should expect to increase their share of Medicaid spending by 37% annually by 2024 to offset the cuts.[ii] The 31 states that expanded their Medicaid eligibility under the ACA will feel the budget strain especially acutely.

The hole in Medicaid spending will have global effects on state budgets, which means that states will be engaging in several measures to prevent spill-over cuts to education, infrastructure, and regulatory spending, among others.[iii]

One of these measures is to cut Medicaid payments. According to Drew Altman of the Kaiser Family Foundation, “cutting payments to providers is always the Medicaid cut of first resort.”[iv] These decreased payments have significant implications on health care access, particularly for rural and low-income localities. Historically, disparities between private and public payments are a major determinant of local provider supply. In the case of anesthesiology, a 2005 GAO report established that differences between private reimbursement and Medicare reimbursements had a negative relationship with the supply of CRNAs in any given area, and that a similar